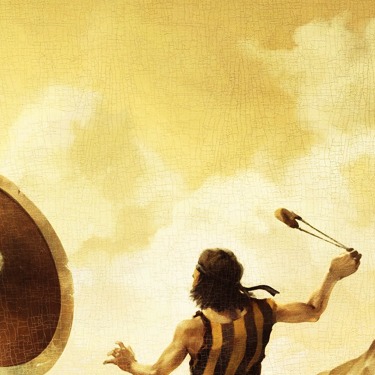 BY MATT NOBLE:
The story of David and Goliath, found in 1 Samuel 17, is a very familiar story for most of us. But let’s not miss the important truths in this passage. There are five things to notice here.

First: God uses the unlikely.
From this passage we are told that David is young (v 14, 33, 42). As a result, he is not the likely candidate to fight Goliath. But God uses him regardless, and he defeats the mighty giant. Through the power of God David defeats Goliath with a sling and a stone. And God can use us too, as “great” or as ordinary as we are. He can use us to do great things for Him, not because we are awesome, but because He is. He can do awesome things even with ordinary people.

Third: God’s reputation matters.
In this passage (v 26, 36 b, 46-47) we can see that David is offended that Goliath would defy the armies of God. David thinks, “Who does this guy think he is that he can defy God’s people in this way? Does he know who he is dealing with? Does he even know who God is?” David had a zeal for God’s reputation and honor. We too should have a zeal for God’s reputation and honor. Sin should sadden us. Defiance toward God should offend us. We need to ask God to give us boldness to confront sin in love because His name and reputation matter.

Fourth: Great faith in a great God.
David shows tremendous faith in God to give him victory over Goliath (v 37, 45-47). He was just a youth and Goliath was a giant and a champion. Although no one was willing to fight Goliath, David showed no fear and trusted fully in God to give him the victory over Goliath. Some of us have bold faith like that, but there are some of us who are less trusting. But no matter where we are on the “faith scale” we need to ask that God would grant us greater faith to trust Him no matter the circumstance.

Fifth (and most important): Jesus is the Greater David.
As we read about David slaying a giant and rescuing his people, let’s be reminded of the greater David, – Jesus. Jesus slays the greater giant of sin and death through His life, death, and resurrection. The Greater David would come to save His people from their sin. This story is not just about a boy and a giant; it’s about pointing us to the Greater David – Jesus! Let’s never forget the mighty work Christ has done for us.
Matt has served as the Pastor of Young Adult Ministries at First Baptist Church of Wesley Chapel since 2009. He is also on staff at Trinity College of Florida working with the TrinityQUEST program. He graduated with a degree in Pastoral Ministry from Trinity College of Florida.