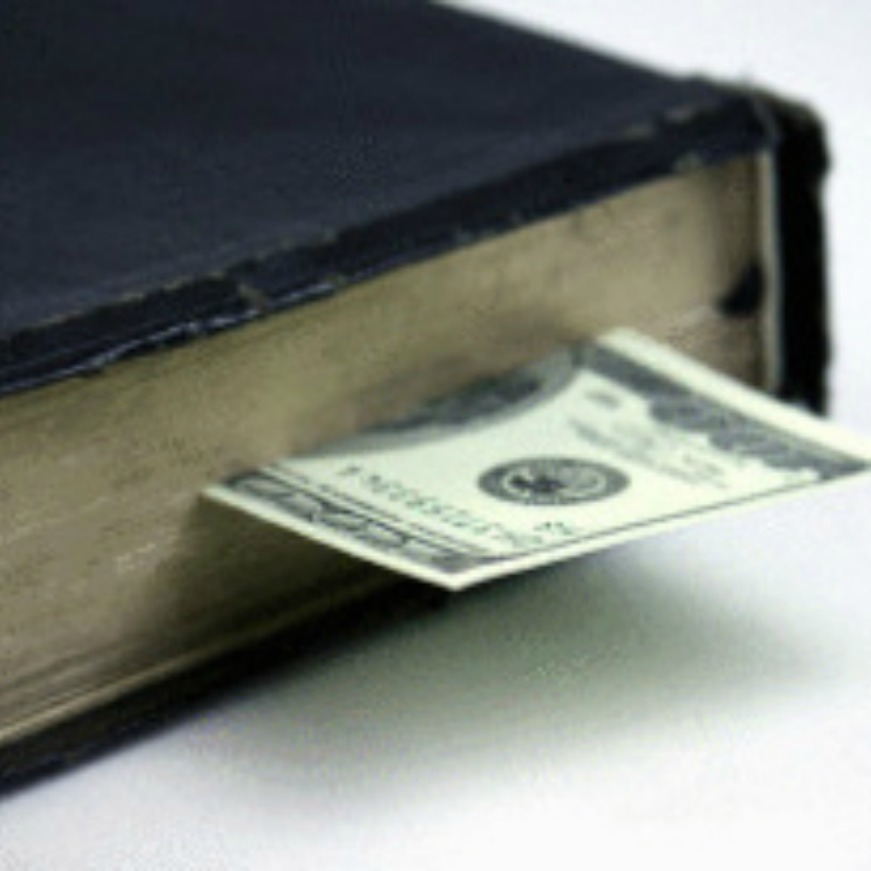 BY DR. JOE ALLOTTA:
Theres only 2 ways for a Pastor to get on the evening news  a sex scandal or a money scandal. (If you feed a 100,000 homeless people or cure cancer you might make the religious section of your towns second biggest newspaper.) Ill deal with avoiding sex scandals some other time. Oh wait, I can do it in one sentence. Just sleep with your wife. Hmm, that was easy. (Well, Ill still dig deeper some other blog for those who need it.) So on to the actually complicated scandal.

It looks greedy first and foremost. It can also make people feel uncomfortable to put (or not put) money into the offering plate. Just avoid it.

Thats the easiest way to skim money. Even when there are 2 people counting (which should always happen), there are too many instances in which someone looks away, uses the restroom, or gets distracted using Google Translate to try to decipher some guys handwriting. The Pastor should never count the money.

If you deposit everything it helps prevent theft a little bit. The amount deposited should be the same amount counted. But some churches keep petty cash. Ugh, thats a disaster waiting to happen. Have the bookkeeper deposit the money. Have them deposit all of it. Then pull out cash after if you have to. Dont even give the Pastor access to the bank account. Have his picture put up there next to the FBIs Most Wanted List.

You could move money around (and its also just painstakingly boring.) If the Pastor even has access to the church books he could hide money until it was seriously audited.

Also, the Pastor should not know who gives, how often they give, or how much they give. It compromises who they minister to and how they minister to them. Its like hearing that Bruce Willis is dead the whole time before watching the Sixth Sense for the first time. You cant be an impartial judge on whether the movie is good or not. Youre compromised.

Its harder to take money you cant get to. It also prevents you from giving money to other people. I.e. the head of my Montessori school Pastor Lyons (seems like a sketchy name in retrospect) who wrote himself a check for $30,000 and then ran off with the church secretary Double whammy.

But this doesnt apply to church credit cards (as long as they cant get out cash.) I actually think a church card can prevent a scam I figured out one day by accident. Lets say I buy a whole bunch of items for VBS on my own card, and turn in a receipt for reimbursement. After the event is over I realize I got 200 extra something-or-others and return them to Party City. I get $200 back (in store credit) but its actually profit because I had already been reimbursed. Dum, dum, ddduuuuummmmm!!!! But if you require the Pastor to use a church credit card, the purchase just gets returned to the purchasing card. No problems.

So in short, Pastors shouldnt touch anything that has anything to do with the Churchs money  ever.

So whats the big deal? Your pastor probably wont steal anything. Why go through all this rigmarole. In most churches, the pastor is the only paid employee. Its just easier for them to do some of this accounting. But they shouldnt. Even if you have the most honest, trustworthy pastor in history. Heres why:

1) Your Pastor is probably underpaid and might be tempted to just take a little because hes already spent his own money on other things. It might even be as innocent as planning on reimbursing the church account because he had no other cash on him. Prevent the temptation.

2) Your Pastor is probably too nice and will give money away to everyone who needs it. Churches get called multiple times per week by people who are in need, and pastors believe every single story. Pastors are compassionate. If they are in charge of giving away money to those in need, your church will be bankrupt within the month.

3) Your Pastor cant be even accused of wrongdoing if he doesnt touch money in any way, shape, or form. Sometimes accusations are as bad as fact, and quickly proving you did nothing wrong is vital. It should be painfully obvious you couldnt steal anything.

4) Your Pastor has more important things to do. Get someone other than a pastor to handle the non-profit, 501-c3 responsibilities. Let your Pastor pastor. Protect him from himself. Pastors already have to do too many mundane things. Wasting time dealing with something as temporal as money seems stupid.

5) Your Pastor is seriously under-qualified to handle anything in the financial arena. I have a Doctorate. I have taken 6-hours on church administration in 8-years of school. (Oh, and I havent taken a math class since I was a junior in high school.) Protect your church. Protect your Pastor. Keep Pastors away from the churchs money.